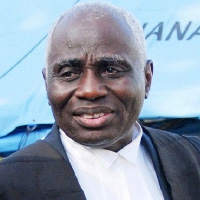 Senior Lawyer affiliated with LithurBrew & Company, with a passion for the potential of low cost energy for the transformation of the African continent and the monetization of its huge mineral resources.

Formerly the Chief Executive Officer of the Ghana National Petroleum Corporation (GNPC) in its formative period from 1988 to December 2000, perhaps the most intensive period of oil and gas exploration in Ghana, culminating in the discovery of the giant Jubilee field in June 2007. Many international oil companies were attracted to enter joint ventures with GNPC to undertake exploration. GNPC initiated a project which sought to substitute liquefied petroleum gas (LPG) from associated gas for fuelwood for domestic cooking using locally designed cookstoves.

GNPC also developed a focus on the use of natural gas for power generation to complement Ghana’s hydro-based power generation system that was under pressure as water levels in the Volta Lake went through severe fluctuations, no doubt from climate change impacts.

Tsatsu was one of the drivers of the West African Gas Pipeline project (which comprised Chevron as managing sponsor, Shell, Nigerian National Petroleum Corporation, GNPC, Sobegaz of Benin and Sotogaz of Togo).

He advised the Government of Equatorial Guinea on the establishment of its national oil company, GEPETROL. He has also previously advised the Government of Benin as a consultant of the United Nations Centre for Transnational Corporations (UNCTC) on upstream petroleum matters, with particular reference to the Seme field which is the only field that has produced oil in Benin and which had been shut in after only a few years of production.