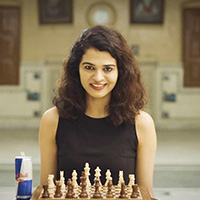 Tania Sachdev (born 20 August 1986) is an Indian chess player, who holds the FIDE titles of International Master (IM) and Woman Grandmaster (WGM). She is also a chess presenter and commentator.
In 2005, she became the eighth Indian player to be awarded the Woman Grandmaster title. She won India’s National Women’s Premier Chess Championship in 2006 and 2007. In 2007, she also won the Women’s Asian Chess Championship with 6½ points out of nine rounds in Tehran. She was conferred with the prestigious Arjuna Award in 2009. In 2016, Sachdev won the best woman’s prize at the Reykjavik Open and won the Commonwealth women’s champion title in Kalutara.
She has played for the Indian national team in the Women’s Chess Olympiads since 2008, the Women’s World Team Chess Championship in 2009 and 2011, the Women’s Asian Team Chess Championship since 2003, the 2006 Asian Games, and the 2009 Asian Indoor Games. Sachdev won the individual bronze medal for board 3 at the 2012 Women’s Chess Olympiad in Istanbul, four team silver medals (in 2008, 2009, 2012, and 2014) and four individual ones (three silver and one bronze) at the Women’s Asian Team Championship.
Sachdev has presented a Fritztrainer Strategy DVD for Chessbase and was a member of the official commentary team for the 2013 (Chennai) World Championship Match between Magnus Carlsen and Viswanathan Anand.