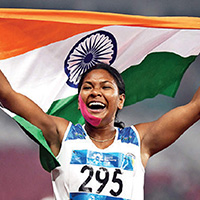 Swapna Barman (born 29 October 1996) is an Indian heptathlete. She won the gold medal at 2018 Asian Games and was placed first in the Heptathlon at the 2017 Asian Athletics Championships. In August 2019, she was honoured with the Arjun Award.Barman won the gold at 2018 Asian Games, she accomplished this despite a jaw injury. Barman collapsed during the final event of the 2017 Asian Athletics Championships – Women’s heptathlon which was the 800 metres. However Barman had broken many of her personal recordsand she had already gained enough points from the previous six events and she had finished fourth in the 800 metres.
In 2016, she was supported by the GoSports Foundation through the Rahul Dravid Athlete Mentorship Programme.