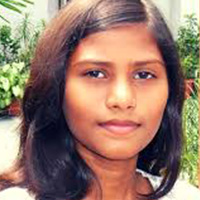 She was just five when she was directly enrolled in class IX in 2005. When she was seven, she got listed in the Limca Book of Records for being the ‘youngest student’ to pass class X. She was 13 when she completed her graduation and at the age of 15, she has created yet another record by finishing her Msc. And that too with a Semester Grade Point Average (SGPAs) of 8!
Meet Sushma Verma, a 15-year old young genius from the outskirts of Lucknow, Uttar Pradesh, who has made headlines by clearing MSc (Microbiology) from Babasaheb Bhimrao Ambedkar (Central) University (BBAU).
Her brilliance does not just shine in India. She was invited for an IQ test in Japan where she competed with 35 other students of her age and stood first.
She aspires to become a doctor but her age came in between her dreams and her CPMT results were withheld because she was under age. As she couldn’t pursue the medical course due to age constraints, she thought of finishing her PhD till she turns 17.
Daughter of a sanitation worker who is employed in the same college where she studied her Msc, Sushma was also given a grant of Rs. 8,00,000 by Sulabh’s chief Dr Bindeshwari Pathak towards higher education.