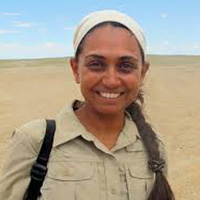 Sucheta Kadethankar (Marathi: सुचेता कडेठाणकर) from Pune India, on 15 July 2011 became the first Indian woman to walk across the Gobi Desert, a distance of 1,000 miles (1,600 km) in Mongolia, Asia’s largest desert.Kadethankar was part of a 13-member team from nine countries led by Ripley Davenport, the desert explorer, in the Gobi Desert 2011 expedition. The guided expedition was supported by four-wheel drive truck, local Mongolian guides and 12 Bactrian camels.he Gobi trek that Kadethankar completed, titled “Gobi Crossing 2011”, was an event organized by the Explore Foundation of Ireland. It catered to young people who wished to explore the wild desert of Gobi (the fifth largest desert in the world) in Mongolia. It was planned as a 60-day trek covering a distance of 1,600 kilometres (990 mi). Kadethankar was one of 13 selected walkers, including Christopher Schrader (who became the youngest person to cross the Gobi Desert on foot) and Faraz Shibli (who became the youngest Briton to do the same). The team included seven women but only three of them endured the trek to the last; Kadethankar was one of them.Her expenses for the expedition were US$7000, while her travel was met by her employer Symantec. It was a charity trek to support the Edu Relief, a Mongolian NGO, to support free education to students in Mongolia.The trek route was described by Kadethankar as drab, dreary and endless.
After Kadethankar registered to participate in the trek, she trained for six months by walking every day from her office and back, a distance of 24 kilometres (15 mi), carrying a heavy backpack.