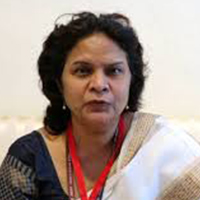 Stuti Kacker, an IAS officer (1978 batch) retired as Chairperson of the National Commission for the Protection of Child Rights. With a career spanning almost forty years, she has worked extensively in the areas of social justice and empowerment, information and broadcasting, and industrial development. She is particularly well known for her contribution to the social sectors. As Union Secretary, she sought and established the Department of Empowerment of Persons with Disabilities, under the Ministry of Social Justice and Empowerment. She served as Joint S / Additional Secretary in the Ministry of Information & Broadcasting and was also the Director of the Indian Institute of Mass Communication. She was the key driver for the formulation and implementation of several policy measures to strengthen the media industry. Smt. Kacker has worked extensively in her State of Uttar Pradesh on important assignments ,such as Commissioner of Jhansi; the Commissioner and Director of Industries; District Magistrate of Ghazipur etc. She holds a Master’s degree in Botany from the University of Allahabad and was awarded five gold medals for her academic achievements. She is also an M. Phil (Social Sciences) with distinction, from the Indian Institute of Public Administration (Panjab University), New Delhi. She has also attended mid-career trainings at the Harvard Kennedy School, USA; Linkopings University, Sweden; and the Institute of Development Studies, UK.