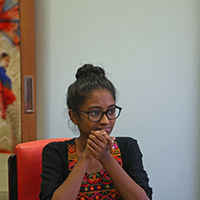 Shweta Katti is a 21-year-old girl from Kamatipura. Born to a sex worker named Vandana, Shweta had been raped many times by her step father, when she was a child.
Obviously, her childhood was dreadful. Her step father used to call Shweta kaaliladki (the black girl). Her mother was helpless. Even though Shweta was studious, she did not get a chance to explore her studies without problems. With lots of struggles she joined in a Marathi medium-school, where her teachers fed her in the afternoons.
It was Robin Chourasia, the founder of Kranti, an NGO based in Mumbai, which works for the upliftment of sex workers and their daughters, changed Shweta Katti’s life.
Shweta met Robin after she passed her 10th standard examination. Robin was literally adopting her to fulfill her wishes. Kranti provided her the facilities to achieve her personal goals, including educational support, regular therapy, extracurricular activities, and leadership training. Shweta excelled in all programmes conducted by Kranti and even she began to go for classes to educate sex workers.
After joining Kranti, she had developed her language skills in English. After passing Class 12 examination with high marks, she applied to many foreign universities for her graduation.
She got selected in almost three American Universities, among which she was interested in the famous Bard College to pursue her graduation in psychology. They’d offered her a $30,000 scholarship that covers her tuition fees for the year, as well as half her accommodation cost. Thus Shweta Katti became the first girl from Mumbai’s red-light district to travel to the United States for education.
But finding the rest of the fund to send Shweta to Bard was not that much easy for Robin. For which, she had conducted several campaigns via social media. Shweta Katti’s story was welcomed by the people from India and abroad, hence fund started to flow to her account. And finally, Shweta found her way to Bard in the year 2013. Now, she had completed her graduation in Psychology.