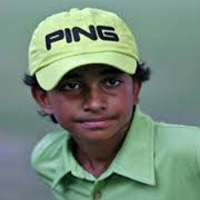 Shubham Jaglan (born 16 August 2004) is an Indian amateur golfer who won the Junior World Golf Championships in 2015. Jaglan is also World Record holder,9 under in Classic Junior Open, 2012 and is recipient of the “NDTV – Emerging Player” and “Margdarshan” awards. Jaglan has won over 100 domestic and international tournaments.