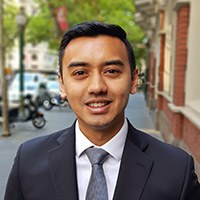 Shanthakumar has advised impact-focused companies in the Infrastructure, property, technology and medical sectors on strategy and capital raising in Australia, Asia, Europe and the Middle East. He has also previously worked in corporate law in Sydney and London with Herbert Smith Freehills, the United Nations Economic and Social Council in New York and served as an Infantry Officer in the Singapore Armed Forces.  Shanthakumar holds a B. Econ/LLB from the University of Sydney and is admitted to practice in the Supreme Court of NSW.