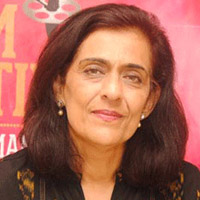 Rashmi Lamba is the ‘India Council Chair’ at the ‘Geena Davis Institute on Gender in Media’ (GDI). Rashmi initiated the first ‘Global Symposium on Gender in Media’ in Mumbai at the ‘FICCI FLO Film Festival’ themed on women empowerment, launched by Rashmi as the Festival Director and spearheaded the ‘Mumbai Film Mart’ at the MAMI Film Festival, initiated the Films Division ‘MIFF HUB’ to promote documentaries and curates for the ‘Samabhav Travelling Film Festival’ by MAVA (Men Against Violence and Abuse). She has held pivotal roles as Industry Director, Festival Producer and Jury Manager at leading international Film Festivals in Dubai, Abu Dhabi and Toronto. As an Impact Producer, Rashmi is an Advisor at ‘Good Pitch India’ and promotes cause led films like a Jhalki, to end child trafficking, inspired by the Indian Nobel Peace Prize Laureate, Kailash Satyarthi.