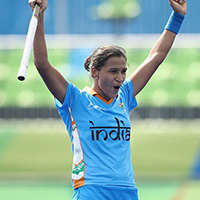 Rani Rampal (born 4 December 1994) is an Indian field hockey player. At the age of 15, she was the youngest player in the national team which participated in the 2010 World Cup. She has completed her schooling but was not able to get the graduate degree due to practice sessions and matches which were lined up. She plays forward on her team. She has played 212 international matches and scored 134 goals. She is currently the Captain for Indian Women’s Hockey Team. She is considered to be one of the best women hockey players in the world. She is also well known as a striker who often doubles up as mid-fielder. She has a great fascination with CWG. In 2020, the Government of India honoured her with the Padma Shri.
Rani played in the Champion’s Challenge Tournament held in Kazan, Russia in June 2009 and powered India to a win by scoring 4 goals in the finals. She was adjudged “The Top Goal Scorer” and the “Young Player of the Tournament.”
She was instrumental in winning the silver medal for the Indian team in the Asia Cup held in Nov 2009. After playing with India’s national team at 2010 Commonwealth Games and 2010 Asian Games, Rani Rampal was nominated in FIH Women’s All-Star Team of 2010. She was nominated for ‘ young woman player of the year’ award. She was also included the All-Star team of the Asian Hockey Federation based on her performance in 2010 Asian Games at Guangzhou.
At the 2010 Women’s Hockey World Cup held in Rosario, Argentina, she scored a total of seven goals which placed India in the ninth position in World Women’s hockey rankings. This is India’s best performance since 1978. She is the only Indian to be nominated for the FIH Women’s Young Player of the Year Award, 2010. She was conferred the “Best Young Player of the Tournament” award at the Women’s Hockey World Cup 2010, recognizing her stellar performance as the top field goal scorer in the tournament. She was awarded with the Arjuna award in 2016 which was like one of her dreams come true.
She was also adjudged the ‘Player of the Tournament’ at the 2013 Junior World Cup which India finished with a bronze medal. She has been named for FICCI Comeback of the Year Award 2014. In 2013 Junior World Cup she made India won its first ever bronze medal at the event.