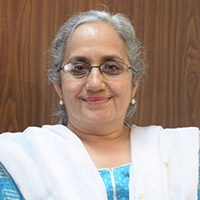 Rajni Bakshi is a Mumbai-based author and speaker.

Her books include: Bazaars, Conversations and Freedom: for a market culture beyond greed and fear (Penguin, India, 2009 and Greenleaf, UK, 2012), which won two Vodafone-Crossword Awards; Bapu Kuti: Journeys in Rediscovery of Gandhi (Penguin, India, 1998) which inspired the Hindi film Swades;  Long Haul: the Bombay Textile Workers Strike 1982-83 (BUILD, India, 1986). Rajni has also written several monographs including:  Trusteeship: Business and the economics of well-being (2016); Civilizational Gandhi (2012); An Economics for Well-Being (2007); Let’s Make it Happen: a backgrounder on New Economics (2003); A Warning and an Opportunity: the Dispute over Swami Vivekananda’s Legacy (1994).

She is a member of the Executive Committee of the Gandhi Smriti and Darshan Samiti, an autonomous body under the Ministry of Culture, Government of India.

Rajni was awarded the Homi Bhabha Fellowship in 2000.

From 2013 to 2016 Rajni was the Gandhi Peace Fellow at Gateway House: Indian Council on Global Relations, a Mumbai based foreign policy think tank.  She serves on the Boards of Child Rights and You (CRY), Citizens for Peace (CfP) and the Centre of Education and Documentation (CED).

Rajni has a BA in Journalism and Political Science from George Washington University and an MA in Philosophy from the University of Rajasthan.