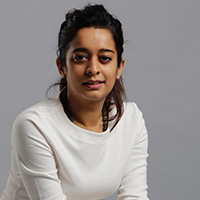 Prerna Mukharya is the Founder of Outline India – a for-profit social enterprise that works to create social impact through data. Her research start-up focuses on how data is collected, and impact is measured for running social schemes and programs by academics, policy makers, private stakeholders, and the Indian government. Founded in 2012, Outline India has worked across 26 states, over 9000 villages and interviewed over 4 million stakeholders. Prerna just launched Track Your Metrics (TYM) – a tech tool for quick impact assessment by small NGOs, government bodies and big funders, equipping the former with means to secure more funding and the latter to hold their grantees accountable. The Android app/web-based platform aims to change the way we track and finance social programs at ~0-unit cost. Prerna was featured on Fortune magazines’ 40 under 40 list for her work with ground level data in 2017 and 2018. She was featured among the top 25 businesswomen in India by Forbes in their annual issue featuring women leaders running profitable companies in 2018. She was also among the top 40 women changemakers in the 2018 annual list by India Today and among the 25 most powerful Businesswomen in India, by Business Today, in 2019.
In 2018, she was awarded the Chevening Fellowship at Oxford University by Rolls Royce and the UK government. She was also declared a Raisina Fellow in 2017, awarded by the Ministry of external affairs and ORF. She is an Australia India Youth Dialogue fellow, 2015. She holds an MA in Economics from Boston University.