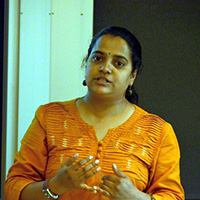 Pankti Jog, is the Executive Secretary for Mahiti Adhikar Gujarat Pahel (MAGP) group. In 2006, MAGP launched the first legal RTI helpline in India, as a support system for citizens to raise awareness and provide help in filing RTI applications. Pankti was also a member of National Task force on RTI and has played key role in drafting guidelines on RTI for pro-active disclosure, now adopted by Dept of Personnel and Training, GOI. Pankti was also awarded “Saathiship” by AID. She has done master in Physics and post master research in Physical Oceanography in National Institute of Oceanography, Goa. She opted to work in Social field after the earthquake of 2001.