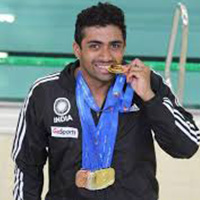 Niranjan Mukundan (born 4 September 1994) is an Indian para-swimmer. He was crowned as the Junior World Champion in the year 2015. Niranjan claimed the silver medal twice in 50m butterfly at the Paralympic nationals in Mumbai, 2004–2005 and Kolkata, 2005-2006. At the state aquatic championships in Bangalore he won silver medal in 2007 and bronze in 2009 in water polo.On 1 November 2015, he won the state’s prestigious Kannada RajyotsavaPrashasti. He also received the National Award (best sportsman with disability) for his exceptional achievement in the field of sports, at Vigyan Bhavan, Delhi. He won 10 medals (7 gold and 3 silver) in the World Junior Games held at Stadskanaal, Netherlands and was also crowned as the Junior World Champion.
At the 2016 IWAS Junior World Games in Prague, Czech Republic, Niranjan won eight more medals, also three gold, two silver and three bronze. He was honoured to have delivered the athletes’ oath in front of his fellow competitors.