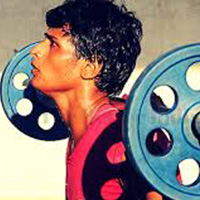 “It gets difficult on some days. But I’m very focussed on my goal. I’ve come a long way and I don’t want to give up now,” she says. She was married at the age of 13 to a mentally challenged man, 30 years her senior. But this didn’t last even a week. When her father-in-law tried to rape her, Neetu ran away from home. Though the ill-treatment by her in-laws angered Neetu’s parents, it didn’t prevent them from marrying her off a second time. However, this time, the man who married her was a kind person. He loved and supported her.
She gave birth to twin boys at the age of 14.
Neetu’s dreams took shape in 2011 when she met coach Ziley Sing. he started training at a facility in Rohtak. Her hard work paid off soon as she won her first bronze medal at a national event that year. Since then, there has been no looking back.
Neetu has gone on to win medals at many national and international events.
She won a silver medal in the 48 kg category in the 35th National Games in Kerala. She has also represented the country in the World Junior Wrestling Championships in Brazil.