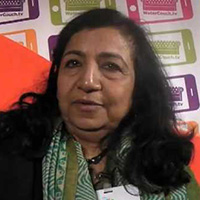 Nafisa Barot has over three decades of experience and commitment to strengthening the process of empowerment at various levels. With a quest to understand people’s issues, she co-founded Utthan in 1981 and built a committed team, which initiated processes and institutions for transformation in the coastal and tribal regions of Gujarat. Utthan’s complex struggle for justice addresses all those who have an India of their dreams and a determination to work for it. Actively associated with the Women’s and other people’s movement, she and the Utthan team have been able to learn from the grassroots about the process of change and empowerment and influence policies at the State, National and international level; with capacity to work with a wide range of stakeholders.