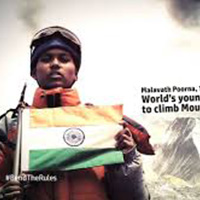 MalavathPurna (also called Malavath Poorna, PurnaMalavath, or Poorna Malavath; born 10 June 2000) is an Indian mountaineer. On 25 May 2014, Poorna scaled the highest peak of Mount Everest and, aged 13 years and 11 months, became the youngest Indian and the youngest girl in the world to have reached the summit. The youngest person, male or female, to summit Mt. Everest is Jordan Romero, who reached the summit at age 13 years and 10 months. She was accompanied by Sandhanapalli Anand Kumar from Khammam. She scaled Mt. Elbrus, the highest peak in Russia and in Europe on 27 July 2017. After reaching the summit of Elbrus, she unfurled a 50ft long Indian Tricolor singing the Indian National Anthem.
A movie based on her life story was released in 2017 named Poorna: Courage Has No Limit directed by Rahul Bose.