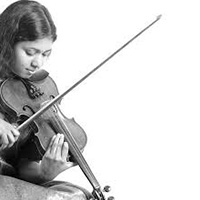 Aathira Krishna is an Indian violinist. She holds the Guinness World Record for her 32-hour-long non-stop Carnatic violin solo concert. She is among the youngest cultural ambassadors of India.Krishna switched to violin from vocal at the age of eight and was soon hailed a child prodigy. She started performing as a Carnatic Violin soloist from the age of 9. Popularly hailed as the “Princess of Indian Violin”, and honoured by the former First Lady of India Usha Narayanan as “The Musical Gem of India”, she has represented Indian classical music at international music festivals.
Krishna was invited twice to perform at the Rashtrapati Bhavan, the Official Residence of the President of India. In 2001, as a child prodigy representing Indian classical music, she presented a paper presentation on “Violin in South Indian Classical Music” for the prestigious International Children’s Assembly held at New Delhi. In 2002, she presented a unique thematic ‘World Music Night’ incorporating music genres of more than 20 nations for the year-long Millennium Celebrations in Kazakizhtan.
In 2003, Krishna entered the Guinness Book of World Records for her 32-hour-long non-stop South Indian classical violin concert dedicated to global peace and harmony. Titled ‘Nadhabrahma’,this was also a tribute to her eminent grandfather. She also holds a place in the Limca Book of Records for the same feat. She was among the youngest of speakers for the Lecture Demonstration Section of Internal MuSIC Festival in Russia on the topic “Violin in Classical Indian Music”. In 2005, she was invited by the Mayor of Menden, Germany to perform at the international music festival Jazz Meets Classics. She also became the first Indian classical musician to perform at the 1000-year-old church at Kaiserwerth, Germany.
In 2005, Krishna was invited to give the Inaugural Concert for the 74th birthday celebration of President of India, A.P.J. Abdul Kalam.