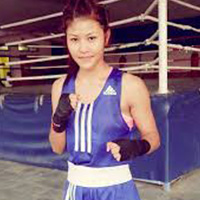 Jamuna Boro was born on 7 May 1997 in Sonitpur, Assam.She hails from Belsiri village. Since her father, ParshuBoro died when she was ten years old, her mother, NirmaliBoro had to work as a vegetable vendor.
Jamuna Boro is an Indian amateur woman boxer. She has also represented India at international competitions. She won a gold medal at the 2nd India Open International Boxing Tournament held in Guwahati. She also won a gold at the 23rd President’s Cup 2019 Boxing International Open Tournament held in Labuan Bajo, East Nusa Tenggara. She won a bronze in the 2019 AIBA Women’s World Boxing Championships held in Ulan-Ude, Russia.