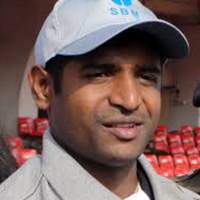 GirishaHosanagaraNagarajegowda (born 26 January 1988), also known as Girish N. Gowda is paralympic high jumper from India. He was born with a disability in the left leg. He represented India in the 2012 Summer Paralympic games held in London in the men’s high jump F-42 category and won the silver medal in the finals with a jump of 1.74 meters using scissors technique. He became the first Indian to win a medal at that event. and the 8th Indian to win a medal at the Paralympics.
Girisha’s first taste of success was when he won a prize at the State-level sports meet in Dharwad when he competed with normal sportsmen. He then won a bronze medal at the Mysore University sports meet. He then won the gold medal at the national high jump championship. His first achievement at the international level came when he won a bronze at the Junior World Championships for the disabled in Ireland in 2006. This was followed by Gold medals in athletic meets in Kuwait and Malaysia.