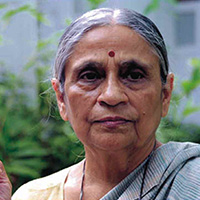 Ela Ramesh Bhatt is the founder of the Self-Employed Women’s Association of India (SEWA). A lawyer by training, Bhatt is a respected leader of the international labour, cooperative, women, and micro-finance movements. She was one of the founders of Women’s World Banking in 1979 with Esther Ocloo and Michaela Walsh, and served as its chair from 1980 to 1998. She currently serves as the Chair of the SEWA Cooperative Bank, of HomeNet, of the International Alliance of Street Vendors, and of WIEGO. She is also a trustee of the Rockefeller Foundation. She was granted an honorary Doctorate degree in Humane Letters by Harvard University in June 2001. Ela Bhatt was also awarded the civilian honour of Padma Shri by the Government of India in 1985, and the Padma Bhushan in 1986. She was awarded the Ramon Magsaysay Award for Community Leadership in 1977 and the Right Livelihood Award in 1984.