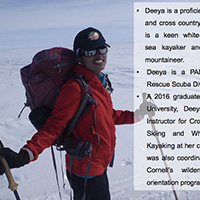 Deeya Bajaj, 24, and her father Ajeet Bajaj, 53, reached the summit of Mount Everest just in time to witness a magical sunrise on May 16 morning after a difficult journey.Deeya was taking her final steps towards the highest point on earth as the sun was rising. It was only after 15 minutes when Ajeet rejoined her, and at 4.45 am they became the first Indian father-daughter duo to conquer the Everest. “It was beautiful. So gorgeous,” Deeya recalled, “To be there, with my dad, was absolutely fantastic. It was emotional for both of us, and pulling out the national flag and planting it proudly at the highest peak gave us an inexplicable joy,” said Ajeet.
Deeya, a graduate from the Cornell University in New York, and her father, who was conferred the Padma Shri in 2012 for his contribution to the growth of adventure tourism, it all began a year back at a gym in Delhi where the two started their training. Swimming, running etc. became part of their routine, they claim. They also went for four trial expeditions—two in Ladakh (August 2017 and February 2018) and one each in France (January 2018) and Nepal (December 2017).