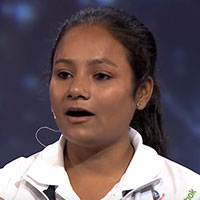 She was pushed from a running train by some robbers in 2011 while she was resisting them. As a result, her left leg had to be amputated below the knee, she got rods in right leg and multiple fractures in spinal cord.

Her aim was to climb each of the continents’ highest peaks and hoist the national flag of India. She has already done seven peaks till 2014: Everest in Asia, Kilimanjaro in Africa, Elbrus in Europe, Kosciuszko in Australia, Aconcagua in Argentina, and Carstensz Pyramid (Puncak Jaya) in Indonesia. She completed her final summit of Mount Vinson in Antarctica on 1 January 2019.