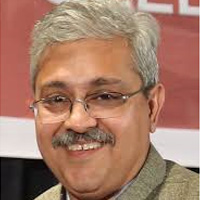 Apoorva Oza is the CEO of Aga Khan Rural Support Programme. He is a mechanical engineer with a diploma in rural management from the Institute of Rural Management, Anand (IRMA). He has also done a course on “Strategies for Change: Managing NGOs” from Cranford University, United Kingdom, and a three-month course from Cornell University, USA. Mr. Oza started his career with Gujarat Dairy Development Corporation and joined AKRSP (India) in 1988. He was appointed as the CEO of AKRSP in 2001. Mr. Oza is also actively involved in founding and supporting NGO’s and NGO networks as well as influencing government policy. He is A director at IRMA, Chairperson of the CSPC (Coastal Salinity Prevention Cell) and on the board of several NGO’S and NGO networks.