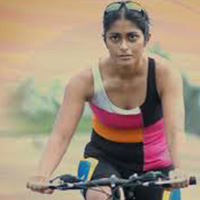 Anuradha “Anu” Vaidyanathan (born 1983 or 1984) is an Indian writer, entrepreneur and triathlete. Vaidyanathan’s first book, the memoir Anywhere But Home – Adventures in Endurance, was published by Harper Collins in 2016, to positive reviews.In 2009, while working towards her PhD, she became the first Asian woman to complete the Ultraman Canada event, placing 6th amongst women, in the absence of any significant sponsorship.
She is the first India-based athlete to train for an participate in Ironman Triathlon. She has competed all over the globe in Ironman distance events and long-course triathlons culminating in Ultraman Canada in 2009, followed by a finish at Ironman Canada three weeks after Ultraman. Vaidyanathan was the first Indian woman to have qualified for the Half Ironman 70.3 Clearwater World Championship in 2008 (although she did not compete in this race).
Vaidyanathan speaks on a variety of topics including Gender, Sport, and Innovation and has addressed several organizations, including Fortune 100 companies, Sporting Teams, Universities and Schools.