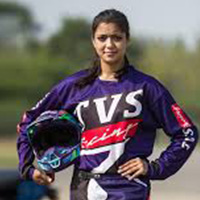 Bangalore based 21-year-old Aishwarya Pissay is the first Indian woman to be a part of women biker team at CEAT MTV Chase the Monsoon Season 2, which so far was an all men’s event. She is also the first Indian women biker to have ridden 13,500 km from Rann of Kutch in Gujarat to Cherrapunji in Meghalaya.
She was the first South Indian girl to participate in the Raid De Himalaya 2016, the world’s toughest high altitude off-road rally. She is also the first woman to represent India in the International Motorsport event, where she secured 4th place.