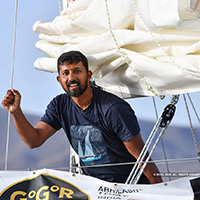 Commander Abhilash Tomy, KC from India, is one of India’s most prominent sailors. A pilot in the Indian Navy, he has had the advantage, just as French sailing legend Eric Tabarly did, of spending much of his career sailing for his Country.
Abhilash has covered 52,000 miles under sail while in the Navy including a solo non-stop circumnavigation from Mumbai and back in 2012/13. He has also represented India in the 2011 Cape Town to Rio Race, the Spanish Copa del Rey Race in 2014 and the Korea Cup for two years in succession. He has been awarded the Tenzing Norgay National Adventure Award, the Kirti Chakra for valour and courageous action and Mac Gregor medal.
He says of the challenge ahead: “This event recreates in the closest way possible way, the magic of the original race. The emphasis is not on technology and its management, but on seamanship and a direct experience of sea. This spartan philosophy is in keeping with my own view that a lot can be achieved with very little.”