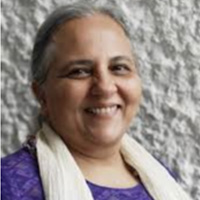 Reema Nanavaty leads Self Employed Women’s Association’s (SEWA) economic and rural development activities reaching out to seventeen million women and their families across India. Since 1989 she has pioneered revival, restoration and innovation of rural livelihoods from district to global level. Reema is being recognized across India and in the neighbouring countries as a champion for creating livelihoods for poor women. She was elected by 2,84,000 members of SEWA as their General Secretary in the year 1999. Since then, Reema has expanded SEWA membership to new heights of 5,30,000 making SEWA the single largest union of informal sector workers in India. Reema currently manages US$ 6 million strong economic activities of SEWA through a federation of 100 cooperatives, nine district associations of artisans, salt farmers, and forestry workers, and a direct outlet of 12000 artisans. Reema graduated in science from Gujarat University and was selected to IAS services of Government of India.